EVESHAM United look to build on their second win of the season in the FA Trophy last weekend when visiting Frome Town in a Southern League Division One South encounter tonight (7.45pm). 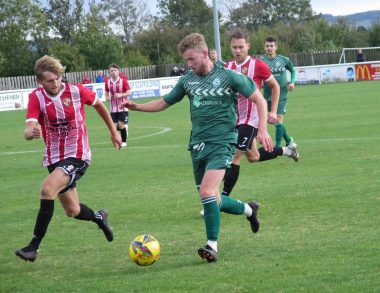 The Robins were 2-1 victors over Biggleswade in the first qualifying round of the Trophy on Saturday, with two goals from Aaron Basford either side of the break enough to set up a home meeting with Carlton Town in the next round – despite Joseph Gauge’s late consolation.

With United going down 3-0 to Sholing in their league opener, a 2-0 defeat of Daventry Town in a midweek FA Cup qualifying clash in addition to the Trophy success last time out has given Neil Hunt’s men a much-needed confidence boost to get their league campaign back on track.

That will be easier said than done however, with Frome victorious in all three of their fixtures so far this term – seeing off Bodmin Town and AFC Stoneham 3-0 and 4-1 respectively in FA Cup qualifying, whilst edging Mangotsfield United 1-0 in their sole league game to date.

But should Evesham put in the kind of performance that they showed against their fellow Step Four rivals at the weekend, they have every chance of staking a claim to three points at The Robins’ Nest in Somerset.

Saturday’s encounter was only seconds old when United hit the front, going in front through Basford’s penalty that flew past Tyler Josephs after Dan Tustin was brought down inside the area.

The pair were involved in another opportunity ten minutes later, with Tustin feeding Basford for an effort that went narrowly wide of the mark, before the Evesham striker was then denied in a one-on-one situation by the excellent Josephs.

Biggleswade could not get a foothold in the game for the majority of the half, only threatening through Alan Fleming’s 25th-minute shot that was hit with more hope than conviction that flew over the crossbar.

Evesham kicked off the second period as they started the first, threatening from the second the referee’s whistle sounded.

Harry Franklin was unlucky not to see his well-struck attempt hit the net, as Josephs again flew across goal at full stretch to tip wide.

While Franklin did not find the scoresheet, he was at least involved in Evesham’s second that put them in the driving seat.

It was the midfielder’s cross which put the ball on a plate for Basford to head home at the far post just before the hour mark.

Substitute Toby Holmes went close to making it three with a header that just evaded the post, while Jack Horrell’s free-kick had Josephs sprawling.

For all of the Robins’ chances, it was game on again when Ryan Inskip’s long-range strike struck the crossbar, falling kindly for Gauge to touch home the rebound with his head with 11 minutes left to play.

Biggleswade’s George Bailey then had a golden opportunity to tie the scoreline three minutes later, but he was unable to keep his header down.

Adam Mace almost made it safe for United after his rebound strike from Jamie Lucas’ initial effort looked set to hit the net, only for the ball to be cleared off the line.

As a result of the victory, Evesham can now look forward to a meeting with Northern Premier League Division One South East opposition in Carlton Town on Saturday, October 17.

My best years will be with the Pears promises Hose