GENEROUS fund-raisers have donated more than £20,000 in a bid to support the family of a five-year-old fighting for his life following a car crash in Italy.

Dominic Boschetti, a pupil at Inkberrow First School, remains in a coma following the horrific incident on December 22 in Lombardy.

The youngster, who lives in Bromsgrove with his mum Jordan, had gone out to Italy to spend Christmas with his father Giuiseppe, and was being driven to see his Italian grandparents when the car he was travelling in was hit by a lorry.

Despite suffering multiple arm and leg injuries, Giuiseppe managed to pull his sleeping son from the car and give him CPR before emergency services arrived. He has undergone a number of operations on his legs since the incident. 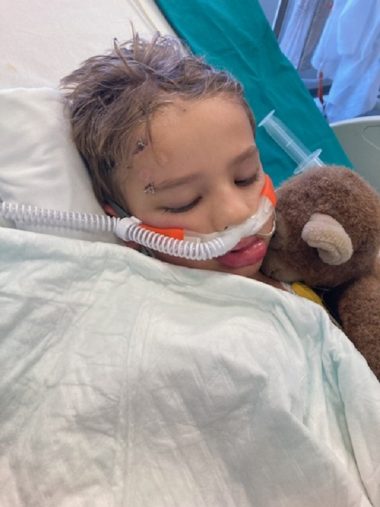 Dominic has been in a medically induced coma since December 22, though no longer on a ventilator.

Dominic suffered a cardiac arrest at the scene and remains in a medically induced coma though is no longer on a ventilator.

Jordan together with Dominic’s uncles Chris and Corin and grandmother Jaqueline from Redditch have all flown to Italy to be with Dominic though only Jordan has been allowed by her son’s bedside because of Italy’s Covid restrictions.

She has given up her job at Studley Castle to be with her son and Corin established a fund-raising page to support her and his nephew he affectionately calls ‘Dob’ who turns six on Thursday (January 13).

“He is the most amazing beautiful little boy. He is bilingual speaking fluent Italian and English,” Corin said.

The fund-raiser has attracted support from across the world with Corin posting updates in both English and Italian to update well-wishers on Dominic’s fight.

“Beautiful little Dob is strong and he is fighting,” Corin said yesterday (Thursday).

“Nan is allowed to see Dob for half an hour today. Unfortunately not me but myself and Chris my brother are speaking with Dob every day via video call.

“Mom is with him and he knows she is there day and night talking to him and reassuring him. Please keep him in your prayers.

“Thank you so much for your kindness and beautiful messages of support,” he added.

Need a fill up? Here’s the cheapest fuel prices in Evesham and Pershore

Need a fill up? Here’s the cheapest fuel prices in Evesham and Pershore

Urgent hunt for a sponsor to meet the £1,200 cost of the first round of Evesham’s legendary Asparagus